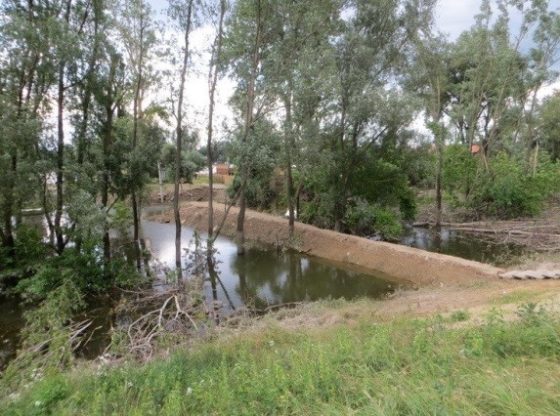 A group of AINS experts wrote a warning article about the situation on Sava flood barrier in column “Views” of newspaper Politika on 22. November 2017.

Before eyes of the authorities who remained silent, insolent people are abusing the Sava embankment upstream of New Belgrade, endangering safety of the entire city. Ignoring arrogantly various laws (Law on Waters, Spatial Plan for the Republic of Serbia, Criminal Law), a couple of hundred people built weekend houses in the water land area, which overlaps with inner and outer water source protection zones. Water land area is defined as the belt of land where building of objects is strictly forbidden, as this area should allow unobstructed maintenance of flood barriers, as well as maneuvering of machines during defence from floods and raising of flood barriers that will be soon needed because of the significant increase of flood threats due to the worsening regimes of high waters. In the case of Sava, the water land comprises the riverbed of this large river, as well as the 50m belt from the enbankment bottom toward the defended area. The most arrogant house owners have done something unknown of in a civilized world: they poured gravel into the riverbed of the large river to raise their houses to a safe level; they, also, have built enbankments to serve as the roads to their houses, and directed a destructive flow of the high water straight toward the flood barrier threatening it dangerously. These activities would be qualified in the world as the “purposely damaging of the vitally important systems, while threatening lives and property of the large number of people”. Not a single institution in charge responded adequately to the submitted complaints.

Embankments, built simultaneously with the HE Djerdap, were dimensioned for large rivers Sava and Danube which were then much smaller in size. Danube is relevant as it raises the Sava level during high waters in Belgrade area. During last, nearly, five decades, embankments have been raised in all upstream countries, and large inundations (floodplains) were eliminated; consequently, regimes of high waters have significantly deteriorated (high waters became higher, with faster arrivals and more destructive power) and reinforcement of flood barriers in Belgrade area will be necessary. It is not clear how this reinforcement could be performed, when the houses on the water land not only makes it impossible, but also prevent basic operational activities during the flood defense? Horrifying, irresponsible, destruction of the flood barrier, which protects the entire New Belgrade from floods of catastrophic proportions, is in a complete collision with the EU directive on the flood risk management (Directive 2007/60/EC) that is also a binding document for Serbia. Climate changes cause worsening of hydrometeorogical phenomena – escalation of extreme precipitations and high waters. In 2014, Serbia managed to avoid catastrophe thanks to devotion of people, but also luck. However, we cannot rely anymore on luck, nor on bags with sand; we need to thoroughly, in peace and favorable weather conditions, reinforce protection barriers and adjust them to the adverse hydrological conditions, which are already a reality. Government ought to find money for this protection, as every dinar invested into prevention returns many times through reduced damage and lower costs of the flood defence. At this very moment, there are international actions focused on climate changes, and the key ordained measure is a reinforcement of the protection systems for these new scenarios. But, how could we improve protection of Belgrade when hundreds of insolent individuals undermine such activities by their destructive behaviour?

These unscrupulous individuals are also jeopardizing sources of the Belgrade water supply system by intrusion into the inner and outer sanitary protection zones with their houses. These houses are built next to the Ranney collectors that extract water through their horizontal pipes, and the houses are, in some cases, literally on the top of the collector pipes from which the water is supplied to consumers. It will be very painful for the person who will have to explain the situation in Brussels, in the context of our obligations in accordance with the “roof” EU directive on waters (Directive 2000/60/EC), which clearly defines strict mandatory rules for water protection. Intruders into the inner and outer groundwater protection zones attack all citizens of Belgrade, as they permanently pollute groundwater aquifers, and endanger with their wastewater the river Sava and Sava lake that supply water to both Makiš factories for water purification.

What needs to be urgently done? Intruders on the waterland, and in the protection zones of water sources, all without exceptions, need to get from the authorities in charge the final decisions with rejections of their legalization requests, as well as the executive decisions for demolitions of their objects. The owners need to be given a reasonable deadline, not longer than a construction season, to remove their objects by themselves and bring the terrain into the initial state. After this deadline, houses of the owners who ignored the government decisions, need to be demolished at the expense of these owners. Also, the state company Srbijavode, responsible for safety of the people along riverbanks, needs to install the ramps at all access roads to flood barrier that will be opened only to allow maintenance of the barrier. This would be an urgent measure that would prevent further barrier destruction which is already in advanced phase. We will follow how the authorities will conduct in this grave situation; we will monitor the city authorities, ministries in charge and other liable institutions and we will act in accordance with our professional ethics. Ethics does not tolerate recklessness that imperils safety of the immense number of people and property of enormous value. Malady of water land usurpation has spread to many Serbian cities, but we concentrated on Belgrade as it is at the highest risk.